The Hilton Savannah Desoto served as host hotel to the Army Otter Caribou Association Reunion last week.  Despite the typical hot summer temperatures and more rain than preferred, the group enjoyed pure southern hospitality at its finest!  As the group Vice President said, “The hotel was extremely helpful in all aspects of our time there.  Anything that I observed that was being done or needed to be done – was done – usually in the back ground.  The hospitality suite was always cleaned and ready to go.  Service was excellent.”

The group of over 100 attendees enjoyed a mix of free time, group meals, meetings, and tours to occupy their time. On Thursday, they travelled a short distance to Hunter Army Air Field to relive old memories of where most once trained.  That evening, the group stayed at the hotel for a buffet dinner.  On Friday, most embarked on a tour of the city with free time for lunch and shopping in the City Market.  The evening trip took them aboard the Savannah River Queen for an evening of dinner and music.  Saturday was spent at the hotel remembering departed comrades at the Memorial Service, followed by the annual business meeting.  The event wrapped up with the final banquet, speaker, and entertainment.

Armed Forces Reunions, Inc. first contracted the group for their 2014 reunion, and has since handled the 2015 and 2016 reunions.  Favorable negotiations are currently underway for the 2017 reunion.

Check out the full reunion photo album on our Facebook page! The 25th Annual Reunion for the USS Little Rock Association was hosted last week in beautiful Warwick-Providence, RI. Members of the association gathered at the Crowne Plaza Warwick where the reunion kicked off on Wednesday, July 13th with registration and a Welcome Party in the Hospitality Room that evening. The next morning, attendees of the reunion boarded the buses and departed for a tour of Newport, RI. The day began with an audio tour of the historic Marble House, home of Mr. and Mrs. William K. Vanderbilt. Built in the 1890’s by New York architect Richard Morris Hunt, this magnificent home and Chinese Tea house is the pinnacle of Gilded Age mansions. Following the tour of Marble House, members of the USS Little Rock association enjoyed lunch at the Brick Marketplace, many opting for some famous New England fish and chips or clam chowder at one of the local pubs. Following lunch, folks enjoyed a lively driving tour of Newport which included sights such as Bellevue Avenue and the spectacular coastline Ocean Drive.

On Friday, attendees had the opportunity to go on a unique tour to the Surface Warfare Officers School (SWOS) on the Newport Naval Base. Once on base, participants were able to enter the LCS-9 simulator room where they used a 3 dimensional setting with voice control and realistic sound controls to experience taking the ship in and out of the channel. After the exhilarating experience of using the LCS-9 simulator, attendees made a stop at the Naval War College Museum. Exhibits here focus on the history of naval warfare and the naval heritage of the Narragansett 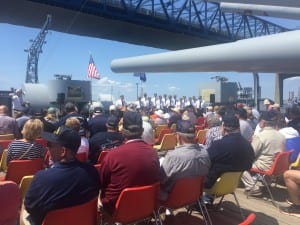 The Memorial Service was held on Saturday morning at Battleship Cove in Fall River, MA onboard the USS Massachusetts. The association honored those lost with a ceremonial reading of names, a wreath laying, a gun salute, and the playing of “Taps”. Following the Memorial Service, members of the USS Little Rock Reunion made their way to the Ward Room where they enjoyed a catered deli lunch complete with home-made potato chips, potato salad, fresh fruit, and cookies. Following lunch, folks were able to tour the decks of the USS Massachusetts, otherwise known as the “Big Mamie.”

That evening the reunion wrapped up with a Reception and a delicious Banquet Dinner. Attendees dinned on meals of Roast Prime Rib of Beef Au Jus, Chicken Breast with Sage and Apple Stuffing, and Baked New England Scrod with Lemon Herb Butter. After dinner concluded, the association handed out several awards including the President’s Award, awarded to Steven Chase, and four awards for the four members who have attended every reunion since the founding of the organization. Awards weren’t the only thing won, the association also raffled off three 50/50 prizes and a handmade riffle donated by a member of the association, Jerry Tylla. The night came to end with everyone on the dance floor enjoying songs from the 40s, 50s, and 60s.

Next year, the USS Little Rock hopes to return to Buffalo, NY, where their ship is located. Armed Forces Reunions has had the privilege of planning reunions for the USS Little Rock Association for the previous 25 years! View the full photo album on our Facebook page at https://www.facebook.com/ArmedForcesReunions/. More than 350 veterans and guests of the 3rd Battalion, 3rd Marines (Vietnam Veterans) reunited in San Diego this past week for their bi-annual reunion.  The host hotel was the Town & Country Resort and Convention Center, a 32-acre resort-style property located in the heart of San Diego’s Mission Valley.

The group advertises a five-night reunion packed with tours, but still allowing plenty of time to hang out in the hospitality room swapping old war stories with fellow comrades.  On Wednesday, 100+ people went aboard the USS Midway on San Diego’s downtown waterfront to see exhibits and restored aircraft, followed by free time for lunch and shopping at nearby Seaport Village.  Thursday and Friday, veterans were transported back in time to visit bases where most once trained.  Camp Pendleton treated close to 150 of our visitors to a military briefing, rifle demos, and lunch in the Mess Hall.  On Friday, roughly 180 of the attendees witnessed the Recruit Graduation at MCRD, followed by a sit-down lunch at Bayview Club and time at the museum.   For those who had perhaps seen enough military related attractions in their time, a harbor cruise was offered with free time in Old Town on Thursday.

On Saturday, the group stayed at the hotel to attend seminars, a Memorial Service, Planning Meeting, and an Auction to raise funds for the next event in Pensacola (2018). The Banquet at the hotel for 345 people wrapped up the event on Saturday evening, with General John Admire serving as guest speaker.

Armed Forces Reunions, Inc has had the privilege of planning their reunions for many years in various cities, such as Washington, DC, Colorado Springs, Branson, and Charleston.

Every Day is Veterans Day in Jacksonville

Jacksonville is a military town, and we are very proud of it! Nestled between the beautiful Atlantic Ocean and the sparkling St. Johns River, the “River City by the Sea” is the perfect destination for military families and groups looking to honor our nation’s heroes and enjoy a great time. Home to a longstanding military presence, Jacksonville has two navy bases, armed forces monuments, historic sites, thousands of active-duty military personnel, plus a vibrant arts and culture scene, an extensive park system, pristine beaches, delicious authentic cuisine, fun attractions, and great Southern hospitality waiting to entertain visitors from across the globe.

Naval Air Station Jacksonville is the birthplace of the famed Blue Angels. And at the beaches, Naval Station Mayport welcomes ships from all over the world. The annual Jacksonville Air Show alternates between the sandy shores of Jacksonville Beach and the impressive force of NAS JAX every October. Another annual event where our military heritage is celebrated and elevated is the Jacksonville Veteran’s Day Parade. Held in Downtown, it is the largest military parade in the state of Florida.

Visiting groups and Navy buffs can tour our military attractions, cruise down the St. Johns River on a dinner cruise boat, explore the outdoors with guided fishing charters, hit the greens in one Jacksonville’s many golf courses, enjoy military appreciation day at THE PLAYERS Championship, cheer on the Jacksonville Jaguars, learn to surf or paddleboard in our 22 miles of beaches, kayak hundreds of miles of wetlands and marshes, enjoy a night at the Symphony, visit the Jacksonville Maritime Heritage Center, and indulge in Jacksonville’s diverse dining and nightlife scene.

“Only in Jax” Military Sites

Interested in our Top Reunion Destinations? Sign up for our newsletter! Each month we highlight at least one reunion-friendly city. More than 60 veterans and guests of the USS Forrest B. Royal reunited in Portland, Maine this past week for their bi-annual reunion.  The host hotel was the Best Western Merry Manor Inn where the service is friendly and the accommodations are comfortable and affordable.  The complimentary breakfast each day was a hit, as was the inviting hospitality room stocked with snacks and drinks.

The group enjoyed a busy but fun reunion.  On Friday, they headed up to Bath, Maine for a guided cruise around Bath Iron Works and a tour of the Maine Maritime Museum.  After lunch in Freeport, most visited LL Bean’s flagship store.  Once Saturday’s business meeting was complete, a trolley picked the group up to explore Portland.  After lunch in Old Port, they saw the childhood home of Henry Wadsworth Longfellow, Bug Light, the Liberty Ships Memorial, as well as other notable landmarks.  The Banquet at the hotel wrapped up the event on Saturday evening, and most headed home w/ fond memories and high hopes for the next reunion.

Armed Forces Reunions, Inc has been honored to plan their reunions for the last twenty years including events in Washington, DC, Buffalo, Norfolk, Branson, Charleston, and more.