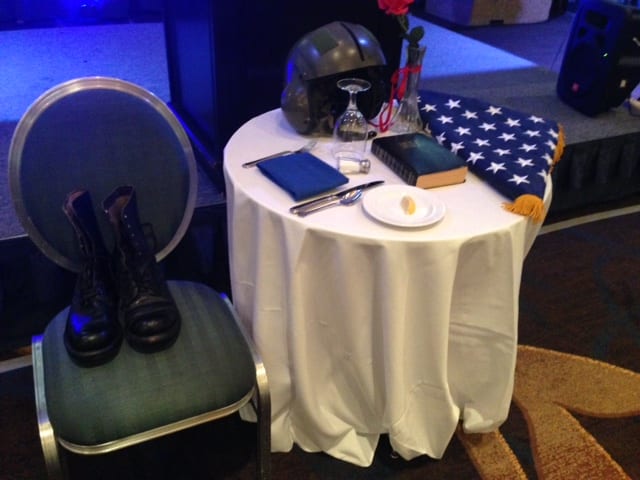 The other Army veterans group from the Vietnam era that met at the Sheraton Pentagon City last week was the OV-1 Mohawk Association.  Almost 300 people were in attendance! The reunion kicked off Thursday with registration and free time in the hospitality room and PX to pick up a new reunion t-shirt or other items.  A welcome dinner buffet followed with an open mic for members to perhaps tell a joke or a story.  On Friday, three buses transported the group into Washington DC for a narrated tour.  They stopped at the WWII Memorial and then drove my many notable sites including the Capitol and Washington Monument.  After lunch, they stopped at a central point to see the Lincoln Memorial, Korean War Memorial, the Vietnam Wall.  They were back in time to rest up for the evening trip to the Kennedy Center to see the famed show, Shear Madness, a hilarious whodunit where the audience gets to catch the killer.  After Saturday’s business meeting, the group had a choice of taking a lunch cruise on the Spirit of Washington or free time at the Steven F. Udvar-Hazy Center, the annex for the Smithsonian National Air and Space Museum, and home to the famed Enola Gay along with many other aircraft and flight memorabilia.   The highlight of the reunion, perhaps was the anticipated Saturday evening banquet, full of lights, music, and action, as meticulously planned by the reunion chairman.   After a complimentary breakfast in the hotel restaurant (offered each morning), most said their farewells in hopes of seeing everyone next year.

Armed Forces Reunions, Inc. has been contracted to plan the last four reunions for this group along with the next one in Colorado Springs.  Plans are already underway for AFR to negotiate the Reno contract for 2018.