Why The Most Decorated Officer in U.S. Military History Chose Norfolk, VA As His Final Resting Place

This writer was there with family at age 10 in 1964. In front of Doumar’s Diner we stood among a crowd of thousands, five-people deep lining Monticello Avenue. Before us rolled a proud, yet somber procession. Most vivid was a casket followed by a riderless black horse. My father, a veteran of the Pacific Theater in World War II, stood in salute. All were in awe of this historic moment, as the great General Douglas MacArthur was paraded to his final resting place at the MacArthur Memorial, the former City Hall Building in Norfolk, Virginia. One of America’s greatest military leaders, General Douglas MacArthur’s litany of accomplishments are incredible: one of only five men to hold the rank of U.S. Army Five-Star General; Supreme Commander of Allied Forces in the Southwest Pacific in World War II; the Supreme Commander of Allied Powers in Japan while serving as administrator of the successful post-war occupation, and the Commander-in-Chief of United Nations Forces in the Korean War. A graduate of the United States Military Academy at West Point, and a lifelong army officer, MacArthur was a dashing brigade commander and interim division commander in World War I, serving in five major campaigns. He was promoted to U.S. Army Chief of Staff in 1930 and afterwards became the only American officer to ever hold the rank/title of Field Marshal of the Philippines. His scores of medals, honors, and accolades are highlighted by the Medal of Honor in 1942 for the defense of the Philippines, several Distinguished Service Crosses, seven Silver Stars, Distinguished Service Medals – the most decorated officer in U.S. military history. A global presence, MacArthur literally saw and changed the world. So what made him choose Norfolk, Virginia as his place of rest? The short and long answer is family, primarily his mother.

Douglas MacArthur was born in Little Rock, Arkansas in 1880 to a military background. His father, Arthur MacArthur Jr., was a First Lieutenant and Adjutant of the 24th Wisconsin Volunteer Infantry Regiment during the Civil War. His heroics became legendary at the 1863 Battle of Missionary Ridge during the Chattanooga Campaign. The 18-year-old led a self-determined spontaneous assault against Confederate troops, where he picked up the regimental flag from a fallen solder and planted it on the crest of a knoll in victory. He was awarded the Medal of Honor, a medal later shared by General Douglas MacArthur and marking the first father and son to each be awarded the highest of military distinctions. A year later Arthur was severely wounded in the Atlanta Campaign, but refused to leave his men. He was promoted to Colonel in 1865, a month before the end of the war.

In the mid to late 1860s he again saw action in the American Indian Wars. Arthur held numerous posts stateside until serving in the Spanish-American War in the late 1800s and the beginning of the 20th century.  During that war he was coined “the Boy Colonel of the Civil War” by newspapers describing his Civil War service. Arthur led the 2nd Division of the Eighth Corps at the victorious Battle of Manila in the Spanish-controlled Philippines. He was promoted to Brigadier General in 1900 and then appointed Military Governor-General of the Philippines. However, a rift about the country’s direction with Civilian Governor William Howard Taft ended Arthur’s term within a year.

He returned to the U.S. mainland and was appointed to Lieutenant General and the senior officer of the service, but still had differences with Taft, who was elected President of the United States in 1909. After being passed over for Army Chief of Staff under the Taft administration, Arthur resigned from the Army. He died in 1912 in the middle of a speech to a reunion group of the 24th Wisconsin Infantry Regiment and was buried in Arlington National Cemetery. His personality clashes with Taft were not unlike those between General Douglas MacArthur and President Harry S. Truman some 45 years later. Douglas MacArthur idolized his father, particularly for his gallantry in the Civil War. The relationship with his beloved mother was a little more complicated. 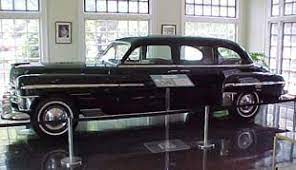 Arthur MacArthur Jr. married Mary Pinkney in 1875 and had three children; Arthur MacArthur III, a captain in the Navy who earned the Navy Cross in World War I; Malcolm MacArthur, who died young of measles, and Douglas MacArthur. Mrs. “Pinky” Hardy was the daughter of Norfolk, Virginia businessman Thomas Asbury Hardy and Elizabeth Margaret Pierce, whose ancestors had been residents of Norfolk before the Revolutionary War. She and Arthur were married at her family’s plantation Riveredge, in the Berkeley section of Norfolk. From a Southern aristocratic family and supporter of the Confederacy, there was some consternation among her clan; two of Hardy’s brothers did not attend the nuptials. However, the new Mrs. MacArthur was a fervent patriot of the mending nation. She was also a strong advocate for her son Douglas to emulate his father, as well as General Robert E. Lee. She moved to West Point when Douglas became a cadet, and again when he was Superintendent. Hardy had high expectations and greatly influenced her son throughout much of his life. 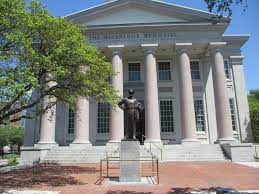 Although Douglas MacArthur never lived in Norfolk, his oldest brother, Arthur MacArthur III, was born in the city and the second eldest brother died there. The family often took holidays in the city. With his deep-rooted maternal connection to Norfolk, General MacArthur spoke in 1951 at the opening of a new city park dedicated to his mother, located where Riveredge once stood. Bricks from the plantation were used for the wall that surrounded the site. This commemoration encouraged city fathers to help pave the way for his shrine in Norfolk. Mayor W. Fred Duckworth in 1960 approached the general with a plan to renovate the circa 1850 Norfolk City Hall and Courthouse into a repository for MacArthur’s papers and personal effects. MacArthur said: “I consider myself a Virginian, as my mother and father were married in the present City of Norfolk. I accept as a great honor the invitation of the city to place my papers, decorations, and other mementos of my military service in its perpetual care and keeping.” In addition to housing his papers and possessions, MacArthur requested that he and his wife be buried at the Memorial.

General Douglas MacArthur was laid to rest on April 11, 1964 at the burgeoning MacArthur Memorial. Today, the inspiring and expanding complex tells his larger-than-life story, accomplishments, triumphs and challenges. Both a museum and research center, it is dedicated to preserving and presenting his legacy, and is a tribute to the millions of men and women who served with him. The complex is highlighted by the towering Rotunda and burial site of the General and his wife Jean, along with a nine-gallery museum, archive and research center, education center, theater, library, welcome center and gift shop. Reflecting back on the funeral procession of 1964, the image of that black riderless horse remains as vivid today as it was then. Named Black Jack after famed World War I Army General John J. “Black Jack” Pershing, that magnificent animal also followed the caissons of Presidents Herbert Hoover, Lyndon B. Johnson and John F. Kennedy. Black Jack was purchased in 1973 by former First Lady and accomplished equestrian Jacqueline Kennedy.