The U.S. Army Transportation Museum is the only museum dedicated to preserving the history of U.S. Army Transportation.  The story of the Army’s Transportation Corps, from horse-drawn wagons of the Revolutionary War to armored vehicles being used today, is told through exhibits, models, and dioramas.  The museum’s artifact collection numbers just under 7,000 objects, plus another 1,000 exhibit props. The collection includes nearly 100 macro artifacts ranging from planes, helicopters, tugboats, and landing craft to trucks, jeeps, hovercraft and trains.

Some of the unique items in the collection include the only surviving gun truck from the Vietnam War “Eve of Destruction” and the only surviving hovercraft to see combat in Vietnam. The museum also houses a unique collection of experimental aircraft and the first helicopter to fly at the South Pole.  Approximately 25% of the museum collection comes from general public donations, while the remainder comes through transfers, bequests, and other sources. The museum ranks as one of the largest museums in the Army Museum system and typically has about 25% of the collection on display at any given point in time. 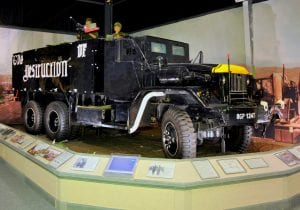 For the sailors out there wondering what the heck you want to see at an Army transportation museum – this is Coastal Virginia! There’s always a sea-going element included when you’re minutes from the largest Navy base in the world. The Marine Park includes landing craft, tugboats, patrol boats, and amphibious craft. Come see the 60-ton BARC amphibious truck or the LCM-6 landing craft that saw service in four wars hauling troops and supplies over beaches all over the world. Experience, the Army’s navy! For the airmen, The Aviation Pavilion tells the story of aviation development in the Army through helicopters, airplanes, and experimental craft which paved the way for today’s Air Force. The Golden Knights jump plane, the oldest Chinook in existence, and President Kennedy’s Army One helicopter are just some of the fascinating aircraft on display.

No matter the branch of service your group comes from, the U.S. Army Transportation Museum in Coastal Virginia has something for you. Reach out to us today to explore the best ways to visit this extremely unique and military-centric region.